After discovering this game in https://arewegameyet.com, I played the campaign all last night. It was worth it. Keep up with the amazing work!

This is really cool! Keep going!

Hello. Can you make a win32 version, please?

Yep, I'll try to add win32 version for the next 0.6 release. Created an issue: https://github.com/ozkriff/zemeroth/issues/506

Thank you very much.

Took a little trial-and-error to get used to the controls (and the amount of movement each opponent has), but I really enjoyed it. Didn't really understood to those stats to the left though, I went dying and learning the "feel" of each class. Here are my thoughts so far!

From my D&D years (and the Alpha's campaign mode), I must say: these Spearmen have way too many reactions; they're kinda OP.  Forming a frontline with 2 and retreating 1 step not to get bombed, then mowing down the small fry with 3 attacks on their turn is a bit too good. I feel 2 reactions would already be great.

I got a little confused due to the alpha interface, but I did realize that at some point my Swordsmen were attacking some 4 times in a turn while raging. Same point as the Spearmen, except not as powerful as acting in the enemy's turn: how about one attack less? A rather minor comment also: the most mobile unit in the game is the only one wearing heavy armor. Perhaps it'd be more fitting for the Hammermen to be in plate.

Alchemists completely rule the battlefield. I loved that. From healing, area denying the boss' spawn hexes, blocking swarm's movement and  preemptively setting a minefield, they're hands-down the best class. I suggest a bit of cooldown-tweaking though. Heal, Fire Bomb and Poison Bomb having it 1 turn longer, while Bomb and Bomb Push having it 1 turn shorter.

(Heal, for it's so good that you can end a 2-alchemist, 3-boss run with your entire team at full health. Fire Bomb/Poison Bomb also present a challenge with 2 alchemists, as they can limit/lock enemies to a corner by alternating the effects way too easily. Bomb is like the Zero to Fire/Poison Bombs' Coca-Cola: it's not as good, and it's the basic Alchemist skill. Finally, Bomb Push is usually the panic button. A ranged, splash-AoE Hammerman Knockback, pretty hard to set up.)

I found the Hammermen to be more of a liability than anything else, as the early swarms aren't the greatest of match-ups to their low mobility (3 squares, no Hop/Jump as melee). Either way, that seems part of their design, so I'd suggest a buff to their Knockback instead. Like affecting other 1-2 adjacent hexagons rather than 1, or a domino-effect that knocks back both the target and any amount of enemies in a straight line,  or knocking the target back an additional square.

Archers, rogues/sneaking, high ground and flanking might interest you as well :)

Even as an Alpha, this was better than Dungeoneers. Kudos, Zemeroth.

Oh, whoa! Thanks for the detailed and inspiring feedback! Updated some issues in the roadmap with it. I hope to fix most of the listed problems sooner or later.

I finally figured out Hammermen can Knockback bombs. That's a big plus in my book! 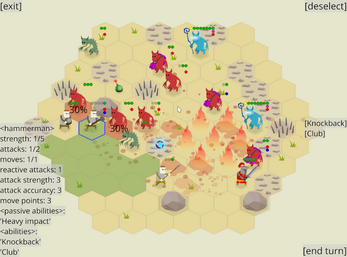 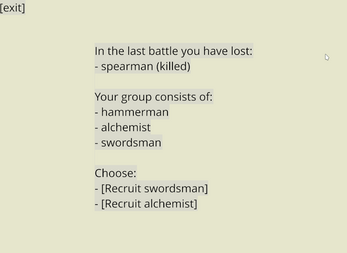 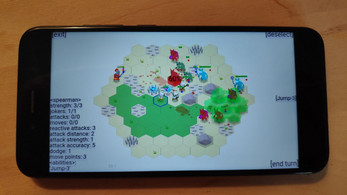